When my mother passed away last December, I imagined that I would find a personal letter addressed to me that would neatly sum up our close relationship and enduring love.  I would read it slowly, savor every word, and store it tenderly in a corner of my jewelry box to retrieve and study again and again.  Call it a wish, a dream, a hope or a fantasy.  In reality, it was a reflection of what I had always planned to do for my loved ones.

In fact, I have already done this.  I wrote my first volume of “read me after I’m gone” letters in 1990.  Four years later I wrote another volume, another in 2003 and the most recent in 2011.  Why I thought Mom would do something similar is peculiar.  Everyone has a role in their family.  My father was our resident dreamer.  My older sister is our selfless caretaker.  My younger brother is the consummate musician.  My mother was the keeper of family history.  I am the writer.  Me.  The one a book reviewer once observed could write with “maudlin sentimentality.”  My final words were the ones destined to bring everyone to tears.

Or so I thought.

My quest for a good-bye letter from Mom began the same day she died.  It had been only a short while since the kindly and somber morticians had come to gently remove her body.  My sister, brother and I returned to her room, collectively took a deep breath and reverently slipped a white three-ring binder off the bookshelf next to her bed.

We knew this notebook was the storehouse of information about her final wishes.  Inside we also found three fat sheet protectors stuffed with something special for each of us.  Notes, newspaper and magazine clippings, poems, and other words of wisdom spilled out of the three synthetic treasure chests.  My sister and brother decided to more closely examine their keepsakes in solitude when they returned from Nevada to their respective homes in Oregon and Washington.  A few days later, and with great anticipation, I sat on Mom’s bed and carefully opened a large red envelope and a two-page letter handwritten on yellow ruled paper.

At the risk of sounding disrespectful or ungrateful, I was disappointed.  Inside the red envelope was an unsigned Christmas card with the word “JOY” on the front.  The letter was an even greater letdown.  It was written 19 years earlier after I had presented her with a 70th birthday album filled with snapshots and loving remembrances from family and friends near and far.  It was almost like a thank you letter, still in draft form with words scratched out and edits squeezed in.  The last line read:

The memories you wrote of are some of my fondest, but I also …

Written sideways in the margin was something akin to a “note to self” about how I had adapted (or rather didn’t adapt) to our new, rainy environment when we moved to Oregon from California in 1966.  Her intent must have been to someday rewrite the letter and include a few favorite memories of raising a daughter she frequently referred to as “the last of the great romantics.”

I read the letter quickly, folded it up and tucked it and the Christmas card back in the sheet protector in the three-ring binder.  I was desperate for solace and the letter just didn’t do the trick.  I had been expecting something much more recent.  Something full of profound thoughts about the last 12 years of our shared life.  Something more in synch with my profound sense of loss.  In hindsight, I know I simply wasn’t ready to appreciate her effort. 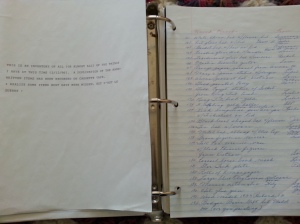 A few weeks later, I began the arduous task of sorting through Mom’s belongings.  Her deep affection for self-sealing plastic bags and three-ring binders is the stuff of family legend, so it was no surprise that my best friend during this process was a big, blue binder labeled “Household Inventory.”  My first strategy was to compare her cache with the lists in the binder.  It quickly became apparent that she had fallen behind in recent years despite occasional help from my sister and me.  Determinedly, I dug in to fill the gaps and organize everything before my sister, brother and their families returned in the spring for a long weekend to choose mementoes.

With every drawer or box I opened, and with every shelf I surveyed, I kept one hopeful eye out for any messages Mom may have hidden away for me.  I found none.  Eventually, I let go of that expectation and, instead, just busied myself cataloguing her belongings.  The result was a series of impressive spreadsheets that could be sorted by the date she acquired an item, by its description, by the name of the person who gave it to her, and more.  One by one, I emailed these archives out so everyone would have the same information I had and the same amount of time to ponder it.  In its own way, it was a comforting task.  I could see Mom smiling down on me, chuckling about my celebrated love affair with spreadsheets.  Since the birth of Microsoft Excel, spreadsheets have been my way of creating order out of virtually every kind of chaos known to mankind.  I couldn’t control Mom’s departure, but at least I could control the aftermath.

Then one winter day when Mom had been gone about six weeks, I unexpectedly received a manila envelope in the mail from my sister.  Inside was a card.  The handwriting on the white envelope did not look familiar.  It simply said my name – Laurie – underlined with a little flourish.  I assumed my sister was passing on a sympathy card from a family member or friend.  “How nice,” I thought.  Then I opened it.  It was, indeed, a sympathy card.  But it was from Mom.

The card was beautifully sentimental with line after line of encouraging, soothing words framed by muted watercolor images of leaves and butterflies.  She signed it:

Her signature and closing thoughts were written with the shaky hand of someone whose time is very short, which is why I did not immediately recognize the writing on the envelope.  A brief note from my sister explained:

Mom loved you so much for taking care of her and being her friend as well as her daughter.  This seems like the perfect time to send this card – you queen of the spreadsheet person.

My wish, my dream, my hope, my fantasy was fulfilled in one powerful rush of emotion and tears.  Mom, the keeper of family history, made Laurie, the writer with a penchant for maudlin sentimentality, break down and sob over a few words of eternal love scratched inside a mass produced Hallmark card delivered at precisely the right moment by the selfless older sister.  You just can’t make up that kind of story.