The sympathy card my mother sent to me posthumously, through my sister, sent a wave of cleansing grief deep through my heart and soul.  As quoted in last week’s column, the only original words from my mother, aside from her name and a string of x’s punctuated by one o, were:

Those 10 words may not seem enough to trigger a flood of overwhelming emotion. For me, though, they were a reminder of everything intimate and personal my mother and I shared. Every pet name, every private joke, every endearment we so often repeated were distilled into that short string of words, scrawled with herculean effort during her last days on Earth.

I learned many months later, after more cards turned up at certain meaningful moments, that Mom conspired with my sister, Leslie, and my niece, Rachel, to emulate a film in which a young widow receives a series of letters from her late husband. “P.S. I Love You” was not my mother’s favorite movie. She preferred science fiction, fantasy and whodunits. However, I’m sure the concept appealed to her because she often worried aloud that she would not be remembered. A few weeks before she died, she asked my sister to jot down a list of her favorite sayings and family nicknames, and she allowed me to shoot a video of her repeating many of the same for posterity.

Since Mom and I were almost inseparable for 12 years, she knew her absence would be particularly difficult for me. My niece later revealed that Mom had sent her on a mission to select just the right cards, and my sister described how she had expended virtually her last ounce of energy secretly signing them. Meanwhile, I had been trying periodically, without success, to persuade Mom to write notes in the Christmas cards I had purchased for family members on her behalf. She just couldn’t muster the strength. In the end, I signed them for her, tucked in the cash she had saved over the preceding 12 months, and composed a personal message commemorating her special relationship with each recipient.

For Mom to conspire with my sister and niece to single me out in such a beautiful, heartfelt way was an honor that I’ll remember until I, too, take my last breath. It doesn’t matter that the handwritten note in each card was brief. It’s absolutely true that the thought is what counts.

One evening, when I was contemplating her precious gesture, I suddenly remembered the “read me after I’m gone” letters I wrote in 1990, 1994, 2003 and 2011. I scolded myself roundly for not thinking to give Mom her set when it became clear that I would outlive her. Surely, I thought, my letters were filled with deep insights laced with my famous maudlin sentimentality, as cited by a long-ago book reviewer. Surely, they would bring a tear even to my usually critical eye.

Like a treasure hunter, I dug into my files and pulled out the letters written to my mother. I opened them carefully, one by one, and was momentarily stunned. The first two obligingly thanked her for being a wonderful parent, but they were primarily vehicles to document some of our favorite axioms.

Be good – and if you can’t be good, be careful. And remember, when you’re poor you have to take what you can get! Because life is just a bowl of cherry pits! (Didn’t we have fun!?!)

Just a short update from my letter of May 1990. Remember these rules of life:

2) Just ’cause your poor, you don’t have to take what you can get.

(Because I will always be with you.)

The third and fourth letters were a bit more lengthy and descriptive of our life together. But in the fourth missive, one line spoke volumes. I blinked and read it again.

Those three words had come to mean everything to Mom and me. Over the 12 years we lived together, we had more good-bye talks than most people could ever bear. Every time one of her doctors diagnosed a serious new condition or illness, we would fear the end was near. All of the appreciation, love and kinship we felt for one another would spill out and, ultimately, help get us past that fear. 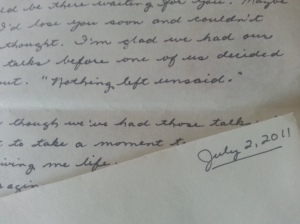 Over time, “nothing left unsaid” became central to our parting ritual whenever I would travel for business or pleasure, or she would leave to spend a few weeks with my siblings in the Pacific Northwest. It’s no wonder I included the line in my last “read me after I’m gone” letter. It’s no wonder that her brief messages in posthumously delivered cards held so much significance for me. We had already said everything. Her messages were like code words that spoke of a companionship so close we sometimes could read each other’s thoughts.

As I ponder those three words, I am reminded of other coded messages I share with loved ones. “Blah blah blah,” I say to my friend, Mary, and she breaks out in laughter as she remembers an irreverent moment while preparing to testify before state lawmakers. “Sisters, sisters,” I sometimes sing to my sister, Leslie, and she finishes with, “there were never such devoted sisters.”  The most precious code in my repertoire is the one I share with my husband, Pete. “11:08,” he writes in a mid-day email at least once a week, and I write back, “Love you, too.”  No, it’s not a time; it was the number of our favorite room at a seaside resort thirty-plus years ago.  Nevertheless, twice a day every day, the clock reminds us of our love for one another.

I’m betting that almost everyone reading this column can think of at least one coded message they share with a family member or friend.  And, if you don’t have one, then Mom and I will loan you ours … that is, as long as you promise to have the conversation that makes it true.

Join 286 other subscribers
Follow Notes From My Mother on WordPress.com