Just before my 9th birthday in 1963, my father paused his maritime career and took what he referred to as a “shore job.”  He often recalled, with a wink and a smile, that a comment I made led to this regrettable decision.  I barely remember it, but I did look up at him one day while he was between voyages and innocently asked, “Why don’t you come home at night like other daddies?”

The decision was regrettable because, within a few hours of clocking in on his first day at a dog food plant, he was seriously injured in a freak accident. He and a co-worker were moving a large, heavy meat cutting machine that suddenly tipped over, trapping him underneath and breaking multiple bones.  We were told he would have died instantly had he not thrust out his arm and, with superhuman effort, kept the contraption from crushing his chest.  For weeks he was hospitalized; immobilized with one leg in traction.  My birthday was celebrated at his bedside. 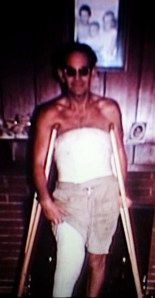 When my father was finally released, he came home in a full body cast and with an arsenal of medical equipment. A hospital bed equipped with a trapeze bar took over one corner of the living room, and a pair of wooden crutches leaned against the wall nearby.  Parked in the covered breezeway between the garage and the house was a long, flat gurney outfitted with over-sized rubber-rimmed wheels for manual propulsion.

Mom was not employed outside the home at the time of the accident but, as soon as the shock subsided, she began applying for bookkeeping jobs in medical offices around the area. She was quickly hired by a team of orthopedic surgeons, and my paternal grandmother began to spend weekdays at our house in the San Fernando Valley so she could look after my father, sister, brother and me.  Most weekends, she returned to her tiny apartment in downtown Los Angeles.

One Friday evening, without any forethought, I asked if I could spend the weekend with my grandmother. She was 75, decidedly puritanical and not inclined to engage in active pastimes that would interest a fourth-grader.  Nevertheless, the two of us got along quite well in those days.  Within minutes Mom was washing my hair over the kitchen sink and telling me to be a good girl.  She handed me a one dollar bill (about $7.50 today) to pay for a treat or a toy in case we went shopping.  At first, I politely declined.  “You don’t have to do that,” I said.  More than 50 years later, I still recall her reply.

During that weekend, my grandmother and I rode the original Angels Flight rail cars up and down the steep incline between Olive and Hill streets, listened to evangelist Dr. John McGee preach 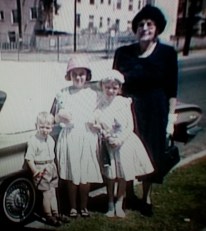 at the colossal Church of the Open Door, and sang hymns in a nearby park with a few of her friends. At one point, we wandered through a cluttered five and dime where I picked out a thick coloring book and proudly paid for it with the gift from my mother.

My memory may be fuzzy on some childhood moments, but the lesson involving the one dollar bill is vivid. It was a singular comment made by an ordinary mother to her young daughter; not taken from a book of etiquette or borrowed from an illustrious poet.  She never said it again.  She never wrote it down.  Yet, it was so powerful a message that it is permanently etched on my heart.  Mom’s words have reminded me to practice being gracious many times over the last five decades.  However, it wasn’t until preparing for this week’s column that I suddenly saw it as a piece of advice that could have helped me through the sometimes grueling years as her caregiver.

In a past column, I described how Mom earned the nickname “The Only One” by periodically lamenting about shouldering more than her share of the responsibilities in our family. The rather unflattering moniker grew into a term of endearment over the years but, speaking as a recent graduate of the caregiver corps, I think it should have been an accolade from the beginning.  Imagine a 39-year-old with three children ranging in age from 4 to 11, a seriously injured husband facing a lengthy rehabilitation, and a household budget blown to smithereens.  Pulling the family through that dark period probably ticked off three of the four requirements for sainthood … and we weren’t even Catholic.

To be fair, though, Mom could not have brought us through it alone. Gracious acceptance of her mother-in-law’s generous gift of weekday homemaking was critically important.

In a plot twist worthy of M. Night Shyamalan, the partnership prevailed despite the fact that Mom and my grandmother were never particularly fond of one another. Their relationship was guarded at best.  As the story goes, my grandmother never thought any woman could live up to the high standards she set for her only son.  My mother, in turn, viewed her as a Class-A critic and meddler.  Regardless, they managed to set aside their differences to achieve a common goal.  The two of them orchestrated a relatively uncomplicated tag team to ensure that the four people they both loved most – my father, sister, brother and I – had everything we needed … and more.

Clean clothes drying on an outdoor line, the aroma of freshly-baked apple pie, southern truisms repeated with a lingering Texas drawl, and black-and-white episodes of the inaugural season of General Hospital became staples of weekdays with our grandmother.  When Mom returned home from work in the evening, she was greeted with a warm dinner and a mostly contented family.  Weekends were spent swimming in our backyard pool, enacting Wagon Train on the wheeled gurney that was supposed to be parked in the breezeway, and playing with the puppies that came along after our Collie had an unchaperoned visit with the neighbor’s German Shepherd.  My sister, brother and I were not necessarily oblivious to the hardship that had befallen our family, but the blow was softened significantly because of the commitment Mom and our grandmother made to each other.

If this story was a made-for-television movie, it would conclude with Mom and my grandmother becoming best of friends through shared adversity. Real-life isn’t always punctuated by Hallmark moments, though.  The two of them remained wary of one another for the rest of their days.  That in no way devalues their temporary alliance.

Photos of Mom from this difficult chapter of our lives provide a hint of the exhaustion she could not entirely escape. I can only imagine what would have become of her, and those of us who were depending on her, had she not joined forces with a rather unlikely partner and followed the same, simple rule she passed on to me.

All writings and photographs posted on "Notes From My Mother" are the intellectual property of Laurie Samsel Olson and may not be reposted or copied in any medium whatsoever without the express written permission of the author.
Loading Comments...
Comment
×
<span>%d</span> bloggers like this: