Last week’s column ended with the image of my mother’s soul drifting up from her breathless body and perching on the foot of the hospital bed that served as her last resting place on Earth.  Like Buzz Lightyear from the 1995 animated film Toy Story, she opened her angel wings, raised her arms, flexed her knees and took a leap of faith. As she flew to an immortal destination, she shouted joyfully …

To Infinity and Beyond!

Even though my mother did not embrace religion or consciously accept the idea of life after death, this picture is plausible to me because of the extraordinary visions and ghostly encounters she experienced from time to time. Such tales became almost commonplace after she moved from Oregon to live with me in Nevada. Years before she started her final decline, Mom saw people and heard voices that no one else could see or hear. She evidently had a head start on the phenomena that the authors of the book Final Gifts, Maggie Callanan and Patricia Kelley, consider “the most prevalent theme in Nearing Death Awareness.”

To my occasional surprise, I was swept effortlessly into some of the visions. One of the most memorable involved Mom’s Yorkshire Terrier, Lucy, who died in 2007 after enduring a lifetime of health issues 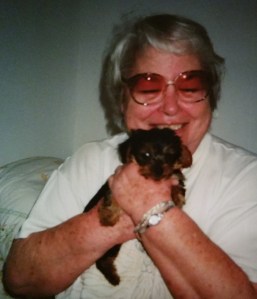 stemming from a liver defect. Mom spent thousands of dollars over the years to make the little dog’s life as happy and as long as possible. When they finally had to say good-bye, she never stopped missing the tiny companion who she considered her true soul mate.

“I can feel Lucy snuggle up to me on the bed at night. Remember how she used to sleep curled up by the back of my neck? In the morning I feel her jump off the bed.”

I never questioned her story, but imagine my surprise when I was presented with proof. A few days before Mom passed away, she was sleeping in the hospital bed rented for us by the hospice program. I was resting on her double bed across the room. I was fully awake when I suddenly felt the spring of a small animal jumping off the bed. Our petite rescue dog, Rosie, had died about eight months prior and our cat was nowhere to be seen.

Our cat. Adopting him was a difficult decision, to say the least. Mom had periodically wished for a kitten. I love cats as well but declined to give in because we live in a rural area where curious felines who escape the safety of home can easily become a tasty dinner for prowling coyotes. One morning, several months before Mom died, she remarked:

“A white cat jumped across the foot of my bed.”

It was the kind of comment that doesn’t really stay with you but your brain nevertheless stores for future reference. A couple of months later I felt compelled to begin a serious hunt for cats available for adoption. All of the little sweethearts I visited in shelters and read about on websites deserved a forever home but none of them seemed right for our family. One night, after weeks of searching, I finally felt a spark when I saw a four-month old abandoned fellow online. The next day I blew off work and lunch with a friend to get to the adoption event 40 miles away before someone else fell in love with him. Much later I remembered Mom’s clearly precognitive remark.

Mom saw people, too. It almost became routine for her to ask whether someone had been in her bedroom early on any given morning. Sometimes she was certain my husband had been standing in her doorway. Once she reported a woman and a little girl by her bedside. She thought the woman might have looked like me, but she didn’t recognize the child. In any case, my answer was always, no, we hadn’t come into her room earlier. The incident most clear in my mind is the day she stated:

“You came into my room this morning in that white robe you always wear.”

“Mom,” I gently replied, if you saw someone in a white robe today or any other day, it wasn’t me. I don’t own a white robe … just the fuzzy, purple one you bought me for Christmas a few years ago.”

If the paranormal spooks you, it’s easy and perhaps soothing to chalk these experiences up to the visions of a half-asleep, chronically ill woman whose mind was beginning to wander. However, she wasn’t half-asleep when most or all of these visions occurred, and she never suffered from dementia or confusion. She was as much awake and alert as you and I are right now. It should also count for something that, during the last few years of Mom’s life, I saw my share of sideways images of people who disappeared when I looked straight toward them and felt a hand upon my back when no one was near.

The most incredible story I can share, though, is Mom’s repeated claim:

“I can hear the man singing.”

I wish I could remember the first time she said it, but I know it was at least a year before she died; possibly earlier than that. Mom swore she could hear a men’s choir … and later just one man … singing. At first I thought she was imagining this while the rhythmic pumping of the oxygen condenser by her bed lulled her to sleep. When she told me she heard the choir one afternoon while wide awake in her recliner in the living room – and with the oxygen condenser sitting silent on the other side of the house – I took more notice.

“Do you recognize the songs?” I asked.

“Sometimes I think so, but I can’t quite understand the words.”

She believed they were possibly old hymns or folk songs; something akin to Danny Boy, but she couldn’t put her finger on it.

“Do you recognize the voice?” I asked another day when she reported hearing just the one man. “Is it John Denver? Is it Eddie Arnold?”

Closer to the end of her life, when she told me she could hear the man singing, I would stand very still or sit next to her on the bed with my eyes closed just listening, listening … hoping I could hear him, too. I never did.

Dreams notwithstanding, almost nothing that can’t be logically explained has occurred in our household since Mom passed away. Like many bereaved daughters and sons might do, I have often walked into her quiet bedroom thinking I would see her sitting in her chair or resting on her bed. I haven’t. I have felt no touches, seen no fleeting images of uninvited guests. Mom has moved on, and she apparently took her spiritual playmates with her.

Where did she go? As noted in last week’s column, I believe that Soul lives on to Infinity and that Love transcends the Great Beyond. Some call what comes next Heaven. Others refer to it the Pearly Gates, Paradise or the Promised Land. Some know the next step in our journey as the Deep Sleep before the Resurrection. Still others favor unique, colorful euphemisms – like my grandmother who called her divine terminal the Peach Orchard.

While I wait to be reunited with Mom in the Kingdom, in Glory or the euphemism I personally prefer – Home – I know I will ever be alert for sweet hellos from the other side. I will listen for Mom’s voice carried softly by the wind, perhaps asking whether I ever bought myself a white robe to match my white kitty. I will rest comfortably on the bed in her quiet room hoping to feel tiny Lucy spring to the floor. I will stand very still and listen for the man singing.

Although I never heard that man while Mom was alive, it’s entirely possible I could hear him now. My brother did a few months back. He heard him singing in the wet, green hills of Southwest Washington … and he heard a woman’s voice singing with him. My brother is certain it was Mom. He couldn’t say what their song was about, but I’m pretty sure I know. Mom was singing of her enduring affection for her family; telling us in death what she so often told us in life …

With love to infinity and beyond.