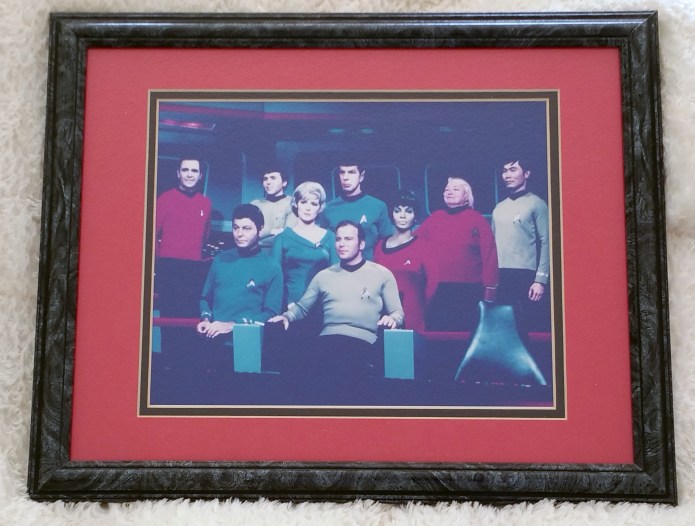 “Beam me up, Scotty” is an oft-misquoted catch phrase from the grand patriarch of all television and film space odysseys, Star Trek.

Contrary to popular belief, Captain James T. Kirk never issued precisely this command to his Chief Engineer, Montgomery Scott, at any time during the last half century. He came close in Star Trek IV: The Voyage Home when he said, “Scotty, beam me up,” but no script contains the exact words in the exact order that fans ‘round the world love to repeat.

Mom loved that hijacked line, too. It was one of the axioms she commemorated for posterity when she dictated some recollections to my sister in her final days. After she passed away, we borrowed the essence of it for her memorial brochure.

The mortuary that handled Mom’s cremation suggested the brochure even though we weren’t planning a service, and we thought, well, why not? However, the samples they provided completely turned us off; they just didn’t reflect Mom’s spirit. I’m sure our faces looked as if we had just sucked lemons when we read standard language like, “Entered into the world on (insert date) and returned to the loving arms of the Heavenly Father on (insert date).” Finally, in a moment of dazzling inspiration, we decided to characterize Mom’s arrival and departure in Star Trek terms.

She would have loved it. 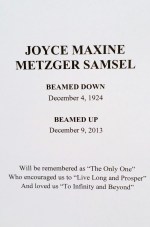 Like legions of other Trekkies, Mom used the altered quote, “Beam me up, Scotty,” as a synonym for escape. Who wouldn’t want to be transported from an unfriendly planet to the safety of a powerful starship? From a stressful workplace to a peaceful tropical island? From a miles-long traffic jam to the serenity of home? From a time in your life when insulin shots and a wheelchair are your best friends to a better day when you enjoyed good health?

While many Star Trek innovations like communicators and hand-held electronic tablets have emerged in real life as cell phones and i-Pads, scientists haven’t quite come up with a way to dematerialize matter and rematerialize it somewhere else. I understand that a handful of brilliant Montgomery Scott wannabes are working on it, but it’s not likely to come true in my lifetime.

It certainly didn’t come true in Mom’s. She had to settle for virtual trips through time and space with her Star Trek comrades. Once she had an opportunity to become part of her favorite crew through a green screen technique at a Universal Studios souvenir shop. Years later she enjoyed a museum tour, a make-believe battle with the cybernetic species known as the Borg and lunch in a futuristic Ferengi café – all within the earthbound walls of the now defunct Star Trek exhibit at the Las Vegas Hilton Hotel. 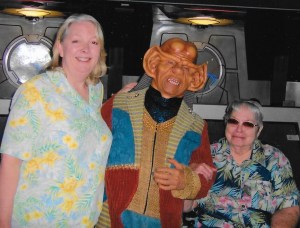 Mom wasn’t really content with fictional interstellar exploration, however. She was the quintessential skywatcher. My niece, Rhianna, and I both have vivid memories of midnight adventures oohing and aahing with Mom as we watched the Perseid and Leonid meteor showers. Most of the family also remembers being with Mom when we excitedly spotted Comet Hale-Bopp hanging over the Pacific Ocean in 1997. Half a dozen years later, while cruising through Alaska’s Inside Passage, I clearly remember rousing her in the middle of the night and pushing her wheelchair to the observation deck to witness the unique spectacle of the Northern Lights.

Memories of her delight in heavenly mysteries are the intangibles Mom bequeathed to us, but she also left behind hard evidence. Ever the organizer, she preserved some of her celestial research in a big, white binder labeled “Things That Interest Me.” The thick scrapbook commemorates her fascination with everything from The Lord of the Rings to Charles Schulz and his immortal Peanuts cartoon strip, but the last section is all about “Outer Space.” It begins with a 2008 article from Parade magazine about the final repair mission of the Hubble Telescope and is followed by Internet printouts of photos snapped by the amazing contraption. Breathtaking galaxies, incredible star formations and other stunning cosmic anomalies constitute a proverbial feast for the eyes. Meanwhile, the cover she chose for the binder erases any doubt about her principal interest. It’s a portrait of the Pillars of Creation inside the Eagle Nebula. 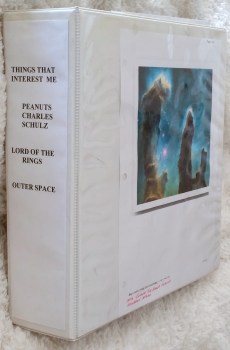 Until I was preparing to write this column, I never paid much attention to the details of Mom’s enchantment with those far away images. Now I know that the Eagle Nebula is essentially a cluster of gas and dust, that the Pillars of Creation are giving birth to stars, and that the phenomena is situated near the constellation that is Mom’s astrological sign – Sagittarius the Archer. Interestingly, some astrologers say that people born under this sign enjoy experiences that are beyond the physically familiar and are eager to explore new dimensions of thought. Whether Mom was aware of that last piece of trivia is unknown but, for me, it opens another window into the soul of the person who was my own Pillar of Creation.

While poking around on the Internet, I was sad to discover that the Pillars of Creation that Mom so loved no longer exist. They were destroyed 6,000 years ago by a supernova, but the shockwave hasn’t reached Earth as yet. We are basically seeing ghosts carried on beams of light over the vast expanse of space.

Learning about the Pillars’ demise is a little like finding out that “Beam me up, Scotty” is not actually a true line from Mom’s beloved space franchise. Yet, I somehow find both realities rather poetic.

Mom’s physical body is gone but her spirit continues to light my way like a heavenly beacon. The letter, cards and notes she left behind for me have served as a loving foundation to document priceless memories about living with her, caring for her during her last years and loving her for a lifetime. As I said to her grandchildren and great grandchildren in last week’s column, she will never truly be gone as long as we keep her in our thoughts, our conversations and our hearts.

As for the errant line from Star Trek, I take comfort in what Captain Kirk and other crewmates often did say when they were ready to return to the safety of their interplanetary home on the starship Enterprise. By the time she passed away five days after her 89th birthday, Mom was exhausted and no longer able to move or talk. Her physical resources were completely used up. In Star Trek jargon, her Dilithium Crystals were depleted. I’d like to think that, when she finally departed, someone somewhere issued the simple but beautiful command that restored her weary soul.

Today I’ll borrow one more line from Star Trek in salute to Mom. In the words of 20th Century whale biologist Dr. Gillian Taylor when she had to say good-bye to Captain Kirk at the end of The Voyage Home, “See you around the galaxy.” 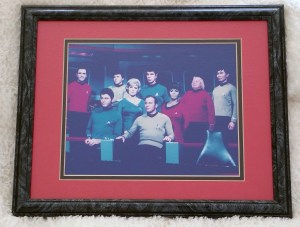