Avast, me hearties! Last week, mustering my best online pirate impression, I invited you to accompany me on a quest for hidden treasure …

Beyond The Dead Cabinet.

If you didn’t read last week’s column, we’ll gladly stay at anchor while you browse through that tale of the cherished possessions residing behind the glass casements of a small curio Mom and I irreverently called The Dead Cabinet. The three shelves are a storehouse for trinkets that hold the keys to the kingdom when it comes to ancestral memories. Among other things, it is home to the wallet that was in my grandfather’s pocket when his body was found washed up on a beach after the only tropical storm to make landfall in California in the 20th Century. On the shelf below that is a well-loved Raggedy Ann that belonged to my husband’s little sister who mysteriously died in her sleep at the age of 13 in 1971. My father’s pipe, my grandmother’s spectacles, my father-in-law’s favorite blue hat – all these and more serve as introductions to stories that might otherwise be lost to the next generation and the next.

Be lively now! Haul in the boarding plank, raise the anchor and hoist the sails. Let’s skim the waves through stories associated with booty that won’t fit in The Dead Cabinet.

As noted more than once in this column, my mother was a Depression-era child. She was also very much a product of World War II. The events of that momentous, four-year period naturally had a major impact on her values and character. One of her most cherished possessions, stored safely in her bedroom closet, is a touchstone for that time in her life. It’s her high school sweater. When I caress its coarse, red threads and stroke the thick white and blue “S42” emblem, I instantly float backward some 73 years. I may not have even been a gleam in my father’s eye yet, but the sweater doesn’t care about that. It’s a time machine for anyone who wants to take the trip.

Mom celebrated her 17th birthday just three days before the Japanese waged their surprise attack on Pearl Harbor on the morning of December 7, 1941. Unlike today when news of that importance would break on every television channel within minutes, it took more than an hour before the general public on the mainland started to become aware of the event. I imagine Mom missed the first announcement. More than likely, she was doing homework or helping her mother in the kitchen at 11:26 Pacific Standard Time (PST). Perhaps, though, her older brothers were listening to the WOR Radio broadcast of a football game between the New York Giants and the Brooklyn Dodgers. (Yes, it was a football game.) A sports announcer was excitedly describing a pass, catch, run and tackle when the play-by-play was suspended for the following message.

We interrupt this broadcast to bring you this important bulletin from the United Press. Flash. Washington. The White House announces Japanese attack on Pearl Harbor.

Sixteen words to introduce a nine-word headline that would change the world. Imagine the shocked stares. Imagine the sound of squeals and static from old tube radios as listeners frantically turned dials, searching the airwaves for more news. They heard it through brief interruptions and then more lengthy commentaries on regularly scheduled NBC and CBS shows. Finally, they heard First Lady Eleanor Roosevelt’s call for courage during her regular Sunday radio broadcast at 3:45 PST. Just three hours later, the entire West Coast from the Mexican to the Canadian borders went black. No radio. No lights in businesses or homes. Even automobile headlights were extinguished. The next day radio broadcasts resumed and President Franklin Roosevelt addressed the nation. He recounted what was known about the infamous Pearl Harbor attack and announced additional attacks by the Japanese on the Philippines, Midway, Guam, Wake and other islands in the Pacific. There was no room for doubt that the United States was at war.

Two months later, in February of 1942, Mom sadly watched her Japanese-American high school friends shipped off to internment camps. They were forcibly removed from their homes on Terminal Island in East San Pedro and their entire fishing village, known as Furusato or “Old Village” was razed. That same month, a Japanese submarine unsuccessfully fired upon an oil field near Santa Barbara to the north. The next day an unknown object (or objects) spotted in the sky over Los Angeles triggered screaming sirens, a blackout, and the firing of some 1,400 artillery shells. San Pedro quickly transformed from a small fishing town into a major U.S. Naval Base. Concrete bunkers concealing 16-inch battle guns that could pitch a 2,000-pound shell 26 miles out to sea were built into the hillsides. People began to suffer from what the military called “war nerves” and were easily panicked. Mom’s photo album from that era tells the intensely personal side of her experience – her brothers in uniform, friends writing from battle zones, classmates killed in action. 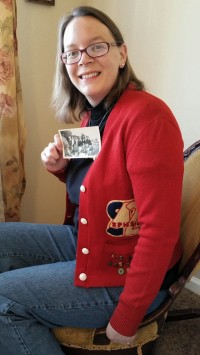 Mom never over-dramatized that time in her life. Other than the heart-wrenching story about her Japanese-American friends, most of the memories she shared were full of nostalgia and patriotism. Food rationing spawned creativity in the kitchen. A paper shortage prompted her senior class to forgo a yearbook. Those headed for graduation chose red, white and blue as their class colors. Mom’s red, white and blue class sweater is testimony to that choice.

The sweater is tiny and, studying it on its hanger, I wonder if it will even fit my slight-of-frame, 10-year-old grandson. Surely, it won’t fit me. My daughter tries it on and the sleeves do stretch around her normal-size arms. Together we get a sense of Mom’s diminutive stature at the age of 17, and somehow we can feel her plucky, young life force in the little garment. Not only that; but the turmoil of wartime is blended right into every stitch of that old, red yarn.

Mom isn’t the only family member who left behind a touchstone too large for The Dead Cabinet. My son is the proud curator of a handmade violin once played by his fraternal great grandfather. Its smooth curves and the rich sound it emanates when chalked horsehair is stroked across the strings can magically turn the clock back a hundred years.

Dell Millard, my husband’s grandfather, was a prolific composer of beautiful hymns, an accomplished gospel singer with his own radio show, and a New Age evangelist decades before the Charismatic Movement of the 1960s. He helped developed the town of Shady Cove east of Medford, Oregon, and loved to hunt for, cut and polish unusual rocks. After a chapel that he built in Medford was removed to make way for a courthouse, he constructed a picturesque water fountain and bench from petrified wood that still welcomes Jackson County visitors. In recent years, every member of our family, from the oldest to the youngest, has gone on a quest from Nevada to Oregon to drink from that fountain and figuratively summon the spirit of our departed loved one. Standing there myself one summer afternoon with my husband, I pictured Dell on that very sidewalk dedicating the fountain to the pioneers of Southern Oregon and reading his poem called “Rocks.” It was June of 1945, World War II was coming to an end, and celebrations were slowly spreading around the globe. In Medford that day, the celebration was just for a simple fountain built by a simple man, but it was no less historic for our family.

These days we don’t really have to go further than my son’s farm, 15 minutes down the road, to time travel with the aid of Dell’s violin. My sister-in-law turned the coveted instrument over to him three years ago this May. The violin was not in the best of shape but, after entrusting it to the healing hands of a local craftsman, it is glorious once more. The restoration revealed that it was made between 1910 and 1912 by a violin-maker in Minneapolis named L.H. Cornell. Dell probably bought it when he was attending a Minnesota university. According to the local craftsman, the quality is on a level with the legendary Stradivarius … without the life-changing price tag.

Those details are fascinating but no more so than the man who played the violin. Judging by his entertaining short story about Freddy the Freckle-Faced Frog, his uplifting sermon about “The Greatest Thing You Can Believe,” and his heartfelt song about going home to “The Beulah Land,” Dell had a winsome spirit, was a profound thinker and, most of all, was a man of deep faith. He passed away a few years before I met my husband, but his legacy looms large in our family. If I have a guardian angel, I could easily imagine it being this tall, strong, gentle, reverent and wise man. When I hold his violin, I can not only imagine it; I can believe it.

The time-worn sweater, the glorious violin, the fountain made of petrified stone and other heirlooms too large for the shelves of a small curio are symbols that give generations past a place in the present. If the sweater had once been worn by the beautiful Marilyn Monroe or the violin had been played by the talented Itzhak Perlman, they might be of interest to pirates looking for valuable plunder. Never mind that. To the landlubbers in our family, they are more precious than gold. They are the keys to our ancestral kingdom. The touchstones that take us across the oceans of time to the sacred place that can only be found …

Beyond The Dead Cabinet.

The dedication plaque at the fountain in front of the Jackson County Courthouse in Medford, Oregon.

Mom and her friends show off their class sweaters. Mom is kneeling in front on the right.

2 thoughts on “Beyond The Dead Cabinet”

Join 286 other subscribers
Follow Notes From My Mother on WordPress.com