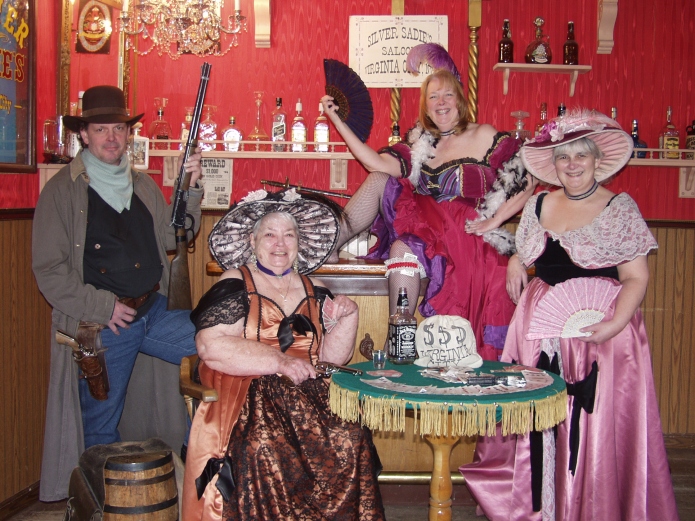 Nine years of caregiving for my increasingly dependent mother taught me more about patience, compassion, commitment and unselfishness than any other experience I’m likely to have in this lifetime. No lesson, though, has ever come in more handy than the value of whimsy.

It’s not that I didn’t already have a fairly well-developed imagination. This characteristic seems to come with the territory for storytellers and grandmothers. No, to put my lesson in more precise terms, I graduated from the role of caregiver with a significantly more evolved appreciation for make-believe. Mom was my talented tutor in this accomplishment. Had our daffy stand-up act ever made it to the stage or screen, I’m sure we would have been best friends with the likes of Lucille Ball and Gilda Radner. It’s no surprise that, in one of the cherished notes Mom left behind, she commemorated one of the campy movie quotes that always made us giggle.

If you’re a fan of the Kurt Russell/Goldie Hawn classic Overboard, you know that Katherine Helmond’s snobbish character used that phrase to alert dutiful butler Rodney McDowell to lift up the folds of her garish evening gown before she primly took a seat. In our family, it’s just one of the lines from the under-rated film that is repeated with predictable regularity, sometimes in unrehearsed unison. Mom found the perfect use for “Andrew, I’m sitting” when she began needing help transferring from her wheelchair to her bed or recliner. It never failed to make the moment less of a chore and more of a comedy sketch.

Tim Conway was another of the esteemed ensemble players in our continuously running parody. His “fall guy” persona gets credit for helping us find a little cheer in “fall patrol,” a critical task when Mom was still able to use her walker but at risk for tumbles.

One day as I followed step by achingly slow step behind her, I said, “I’m going to start calling you Tim.”

“Why would you do that?”

She snickered and, as if it was possible, walked even slower. Ever after she was Tim. Sometimes she pushed the envelope by shuffling along with exaggerated lethargy and declaring with mock delight,

Characters from the animated Disney film Fantasia guest starred once on the short walk from the front door of our little yellow house to the passenger door of my little white Corolla. At that point, Mom was still able to walk while leaning just on my arm, but a couple of missteps that day reminded of her tripping the light fantastic. We dissolved in belly laughs when she compared our accidental dance to the troupe of tutu-clad hippos pirouetting around prima ballerina Hyacinth in a Romanesque garden.

Swashbuckling marauders also played occasional bit parts in our life after Johnny Depp first began sailing the Caribbean Sea as swaggering Captain Jack Sparrow. Along with the rest of the fanciful world, aargh, avast and me hearties found a place in our vocabulary now and then. Our own unique slice of pirate-mania was born unexpectedly in the waiting room of a local podiatrist. We were filling out new patient paperwork and, as was our custom, I read off the questions while Mom provided the answers. Because her hearing was starting to fail, I was accustomed to repeating some queries more distinctly.

“Do you have tired feet?” I asked.

Somehow we managed to finish the form and see the doctor, but our loopy exchange is the only thing we remembered from that introductory visit. We recalled it often, fondly and with devilish laughter until the day Mom couldn’t laugh any longer.

If that conversation left a bizarre impression on those within earshot, then the infamous brain tumor incident must have completely floored the unsuspecting ear, nose and throat specialist who made this diagnosis. It was about nine years before Mom made her final exit and fairly early in our efforts to uncover what had suddenly subverted her imperfect but stable health. Doctors of every major biological system tested her for a seemingly infinite list of possible causes. For years Mom had randomly blamed illusive health symptoms on a phantom brain tumor so, while waiting in the specialist’s office for the results of a CT scan, she said it again.

“I probably have a brain tumor.”

Just at that moment, the doctor walked in and said, “You have a brain tumor.” The fact that we burst out laughing required a little explanation followed by a lot of humble reserve.

About a week later we drove 40 miles to see a neurosurgeon. By then, we were sincerely reserved and wondering what impact this grim diagnosis would have on our lives. We were as unsuspecting as the ear, nose and throat specialist when the neurosurgeon walked in the exam room and chuckled. He took one look at the scan and said, “You don’t need surgery. This is an asymptomatic tumor sitting on top of the protective lining of your brain.” If he didn’t also say, “Get outta here,” then he certainly implied it.

After that, Mom never flippantly blamed anything on a brain tumor. However, Arnold Schwarzenegger’s fish-out-of-water detective from Kindergarten Cop occasionally made a cameo appearance in our lives.

“It’s not a brain tumor,” someone in the family was sure to say while mustering their best Austrian accent. 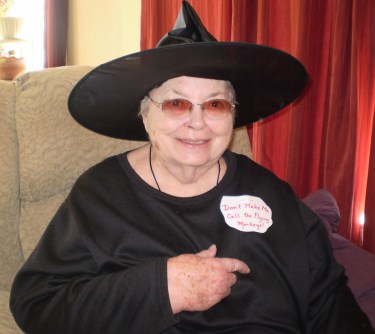 If you don’t believe that repeating film quotes constitutes an appropriate response to the serious matters of caregiving and care receiving, I urge you to pause and think again, my pretty. You’ll believe in more than that should you ever find yourself cast in either of those roles. In the meantime, don’t make me call the flying monkeys!

All jokes aside, incorporating some of our favorite lines into our caregiving routine was certainly a harmless stress reliever. In fact, the most often used quotes have now become so embedded in my memory that there is no escape.  Thank goodness for that … because they now serve as the priceless lifeline that makes me smile even when the vacuum of Mom’s absence is so intense that it feels like a tangible foe.

“All the world’s a stage,” Shakespeare wrote, “and all the men and women merely players. They have their exits and their entrances, and one man in his time plays many parts.”

Katherine’s snooty socialite, Tim’s Old Man, Hyacinth the Hippo, Johnny’s miscreant buccaneer and Arnold’s bewildered gumshoe all had a turn as Mom’s understudy in the theater of life. She may have taken her final curtain call, but I still have our imaginary cast of comical characters to help me through the occasional gloomy mood. On those melancholy days, if I listen with my heart, I can still hear Mom mischievously declare that she is running or that she has pirate feet or that, for heaven’s sake …

I grab that lifeline.  And I smile.